Brazilian death metal corps NERVOCHAOS have released a 360 degree video for the track “Ritualistic”. These 360 degree videos are all the rage now and everyone is getting in on it. The track comes from their upcoming new album Nyctophilia on April 7th via Greyhaze in the US. Check out the video below.

Brazilian death metal lords NERVOCHAOS are set to release their seventh studio album ‘Nyctophilia’ on April 7th via Cogumelo (in Brazil), Greyhaze (in US) and distributed by Plastic Head (in Europe). Today the band has unleashed their 360° video for the song “Ritualistic”, watch it below:

“Nyctophilia” is an eclectic mix of all that characterizes the band, 13 new tracks of 80s-fueled blackened extreme music, executed in NERVOCHAOS trademark: raw, aggressive and organic style of Metal. “Nyctophilia” has a new intensity and it takes a step forward, compared to their older releases.

For the first time, the band recorded the album outside Brazil, spending a month in Como/Italy at Alpha Omega Studio along with producer Alex Azzali, who also did mixing and mastering of the new album. Also it’s the first album composed and recorded with the new line-up which features Lauro ‘Nightrealm’ on vocal/guitar, Cherry on guitar, Thiago ‘Anduscias’ on bass and the only remaining original member Edu Lane on drums. The album artwork was created by Alcides Burn, a talented Brazilian artist that has worked with acts such as Blood Red Throne, Acheron, Iconoclasm, Headhunter DC and many more to list. “Nyctophilia” also features special guest vocals appearance by Sebastian L. of INTO DARKNESS and Leandro P. of R.N.S. plus one track, ‘Vampiric Cannibal Goddess’, with the guitar riffs created by Bolverk of RAGNAROK.

“Nyctophilia” surely is the best album up-to-date from NERVOCHAOS, which managed to evolve musically without losing the band’s proposal and trademark. 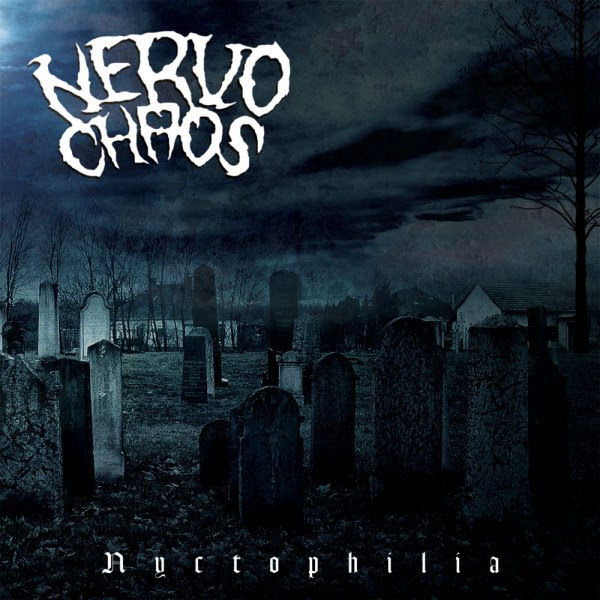 NERVOCHAOS are currently on their Latin American co-headlining Tour, presented by ALPHA OMEGA Management‘s ALPHA OMEGA Tours, with the Brazilian death metal maniacs KRISIUN! Check out the remaining shows below.

Also check out the outstanding 360° live studio video for the song “Total Satan”: