Aussie thrash metal maniacs DESECRATOR have released the new song “BrainScan”. The track comes from their brand new album To The Gallows, which was released yesterday. Give the track a listen below along with more details on the new album.

Australian DESECRATOR release their debut studio album “To The Gallows” today, March 24th! Furthermore the band has unleashed a new song “BrainScan” taken from the new album, check it out below! The outstanding hand painted cover art was created by Melbourne ink wizard Jason Spud Sposito!

Just recently DESECRATOR announced the first dates for their Australian tour, with HIDDEN INTENT, kicking off on March 31st in Hobart. Check out the confirmed shows below.

More dates to be announced soon! 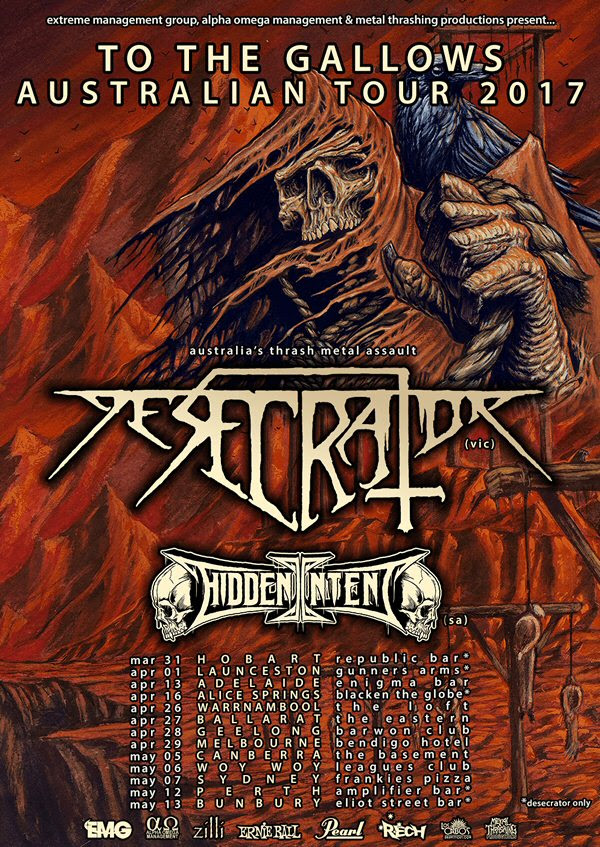 DESECRATOR are a 4-piece Thrash Metal band based in Melbourne, Australia. With a sound that has been compared to early Testament, Death Angel and Sacred Reich, DESECRATOR’s twin guitar attack, punishing rhythm section and blood soaked vocals have won over the old guard of staunch metal fans as well as recruiting the new wave of young thrashers. The lyric video for the title track “To The Gallows” is here: https://m.youtube.com/watch?v=DQtNO16MfNc